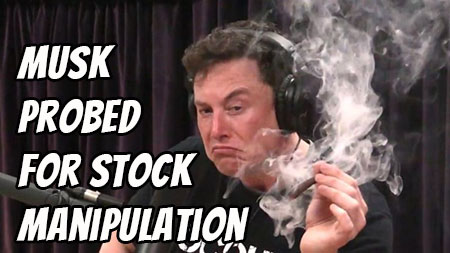 There’s no love lost between Elon Musk and the SEC.

Musk has been an outspoken critic of how the SEC has failed to act, feeling that hedge funds have used manipulative tactics to unfairly drive down Tesla’s stock price.

But in a new SEC probe, Musk could face charges of stock manipulation of his own.

As that drama continues to unfold, Musk is pleased that the US Justice Department has launched an inquiry against short-sellers. Musk told CNBC in an email that he is encouraged by the DOJ’s ongoing investigation.

In his support of the DOJ Musk lashed out against the SEC, saying that it was something the SEC should have done in the first place.

Federal prosecutors are investigating whether short-sellers collaborated to push down stock prices by leaking harmful research reports ahead of time and participating in unlawful trading methods, according to reports earlier this month. As part of its probe, the Justice Department allegedly took hardware, trade data, and private messages from key people.

Two well-known Tesla critics were said to be among those under investigation. A search warrant was apparently issued for Muddy Waters Research founder Carson Block, an outspoken Tesla opponent. According to Bloomberg, Andrew Left of Citron Research, who has also shorted Tesla in the past, had his devices taken by federal officials.

Musk, for one, mentioned in his email that “short and distort” tactics, which include using bad press to push down a company’s stock price, are a means for experienced hedge funds to exploit small investors. If the DOJ’s investigation can clamp down on this practice, small investors may be victimized less frequently.

The technique some of these hedgies engage is is like a pump & dump scheme but in reverse.

Often they will take a short position (often buying put options to leverage their position) in a certain equity and then post damaging news about the company. This will often cause the price of the company to fall just long enough for the schemers to cash out and make some quick gains.

Musk alleges that hedge funds will often repeat this process over and over, as they negatively manipulating a company’s stock price.

Musk’s animosity for short-sellers extends beyond Tesla. During the dramatic increase of GameStop stock last year, Musk spoke out against short sellers. In January 2021, he labelled shorting a “scam legal solely for vestigial reasons” on Twitter.

But while Musk rages against short sellers, he & his brother (Kimbal) are being investigated by the SEC for manipulating Tesla’s stock price with over some of the posts he’s made on Twitter.

And so the fencing match between Musk and the SEC continues.