Goldman Sachs: Inflation’s Gonna Be Worse Than You Think

Goldman Sachs: Inflation will be worse than originally thought.

In a recent statement, Goldman Sachs warns that high inflation in the United States may not drop off later on in the year – as had been previously forecasted.

“The inflation situation has deteriorated this winter, as we originally thought, and the extent to which it will rebound later this year is now in doubt,” Goldman Sachs analysts said in a client note published late Sunday.

In light of this uncertainty, Goldman Sachs has raised its inflation forecast. Core PCE inflation (the Fed’s preferred pricing index) is expected to slow to 3.7 percent by the end of the year, according to the report.

That’s up from Goldman’s earlier projection of 3.1 percent, and nearly double the Federal Reserve’s target of 2%.

The rise and peak of inflation may have lasted long enough to further increase inflation expectations in a way that feeds back to wage and price setting, the firm reported.

And, according to Goldman, if the Russian invasion of Ukraine causes energy costs to skyrocket or affects supply chain in any way, inflation might skyrocket past the already “extremely high levels.”

Economists keep a careful eye on inflation expectations because if firms and consumers believe prices will continue to rise, their behavior will alter, creating a self-fulfilling prophesy.

(Behavior: Essentially they’re speaking of the idea that “the consumer” might sober up and quit spending money like a drunken sailor on shore leave.. And if consumers stop spending, well, the economy shuts down. Party’s over, amigo.)

Simultaneously, the job market is rising, with Goldman Sachs reporting the largest difference between available positions and employees in postwar US history.

This is in stark contrast to what they said not too long ago: that a wage-price spiral was unlikely to happen.

Given the updated inflationary environment, Goldman Sachs believes that the Fed will be easily able to justify rate hikes at each of the remaining 7 meetings they have this year.

Goldman Sachs also feels that there will be an additional rate hike to start the new year in 2023.

[sarcasm] Well that’s something to look forward to, isn’t it? [/sarcasm] 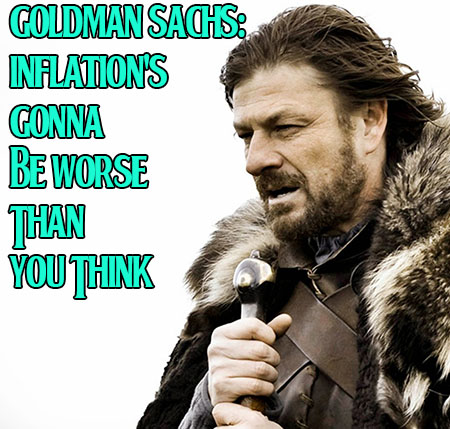