The TikTok War: Russia’s Invasion of Ukraine is Being Broadcasted

Posted by The Minister of Capitalism on Feb 28, 2022 in News

The Russian invasion of Ukraine is being broadcast on TikTok.

According to CNN’s top media journalist Brian Stelter, Ukrainian Instagram stars are now warzone witnesses while urban warzone experts have taken to Twitter to give the Ukrainian forces tips on guerilla warfare.

But the barrage of words and pictures is generating a perplexing media environment that some say could breed a lot of misinformation.

Many are referring to Russia’s invasion of Ukraine as the TikTok war, because users of the network were actively showing Russian military movements even as Russian officials were denying them. Many people are also using social media to become “anti-war activists,” according to Stelter.

When you consider Russia’s state-owned media, the news environment is growing increasingly complicated.

Social media, according to David French, a senior editor at The Dispatch, is showing Americans how “extremely awful” this battle is, but such platforms don’t provide an overall strategic picture, such as Russian soldiers’ positions or the true number of dead.

French went on to say that each TikTok video captures just a microcosm of a moment and as a result, you’d have to invest a significant amount of time to begin piecing together the TikTok jigsaw puzzle to get a real understanding of what’s going on.

And while that may be true, any form of traditional media footage is subject to various cuts, edits & rearrangements before a story is produced to be consumed by viewers. And these stories will always feature the media outlet’sown interpretation and explanation of what transpired.

But the immediacy of these social media posts, French acknowledged, may have encouraged Western governments to “fall in line swiftly” on the various sanctions levied against Russia.

Maybe the inspiring quality of Ukrainian resistance shown on social media shamed a lot of Western countries into taking action.

But there is always the very real chance of misinformation being spread on social media, with videos from 2015 of Russian paratroopers being posted on TikTok and Twitter being a perfect example.

Few individuals understand information warfare as well as most Ukrainians, according to Jane Lytvynenko, an investigative reporter and researcher specialized in disinformation.

“Every conflict has propaganda,” Lytvynenko explained. “And the objective of Russian propaganda right now is to undercut Ukrainian narratives and to terrify Ukrainians,” she explained.

Lytvynenko warned against claims on social media about Russian military movements, many of which are being outed as inaccurate by Ukrainian news sources  in real time.

According to Stelter, a “fog of war” has settled over Ukraine, making it difficult to determine what is going on in areas even 20 miles outside of Kiev. According to French, we may not know the outcome of the conflict for days or weeks.

“As a general rule, the more explicit and dramatic the information, the more mistrust you should apply,” said French, who served in the Iraq War. “Right now, the more high-level, more ambiguous reports are going to be the more trustworthy news.”

If you haven’t already signed up for a TikTok account, you can do so here. (And, yes, it’s free) 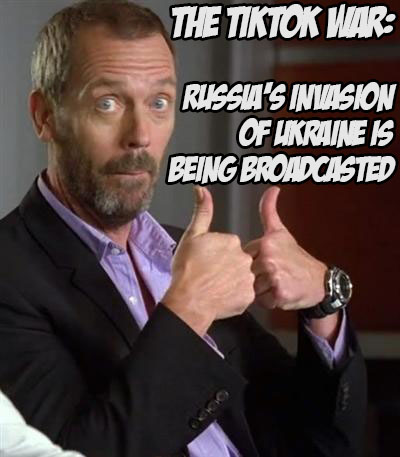