Posted by The Minister of Capitalism on Jul 27, 2022 in Side Hustles

Have you ever heard of the Liver King? He’s a crazy influencer on social media but he’s made a lot of money through his liver-related businesses. But how did Liver King make his money? And who is he? Let’s take a closer look at Liver King and find out what makes him so successful.

Who is the Liver King?

Liver King (Brian Johnson) is a social media personality who advocates for healthy living through Ancestral Lifestyle practices. He names himself the Liver King because of his fondness for liver meat as a source of nourishment. Liver King lives out with his wife and his two Doberman dogs in a large, 8,300-square-foot mansion in Austin, Texas. In videos posted on social media (having a strong presence on Tiktok & Instagram), he claims that he and his wife use an extremely thin mattress, which is made of wood platforms covered in thin woolen pads for a dab of comfort.

Although it looks like Liver King is a typical poster on social media, details about his private life remain obscure. He calls his wife Liver Queen, and his sons Savage Liver Boys.

Liver King is the CEO of four separate business that operate somewhat the same, for they all sell and market dietary supplements and protein powders asserting will enable you to get just as jacked as him. Liver King links these items to the promotion of an Ancestral Lifestyle.

Side note: If you’re wanting to become an influencer as part of your side hustle, it’s a good idea to have a brandable angle that can set you apart from everyone else. In the case of Brian Johnson, the name “Liver King” is extremely brandable and sets him apart from other influencers.

The 9 Ancestral Tenets of Liver King

The Liver King is said to uphold nine ancestral tenets, which form the basis of his power and authority.

When you sleep, your body and brain are able to repair themselves. It’s a great way for them not only obtain rest but also to restore essential nutrients that were lost during the day. So do your best to go to bed without any electronics before bedtime as this will help you slip in to a deep sleep much easier!

Processed food is not healthy so eliminate it from your diet. Seed oils and liquid calories can be replaced with healthier alternatives such as vegetables or fruit for example, but you’ll have more success if the base of each meal includes whole grains like brown rice.!

The greatest joy in life is found not through consumption, but rather by investing time and energy into physical exercise. This statement rings especially true for Brian who walks three times per day with his dog at a pace that’s comfortable for them both.

Movement builds well-being which trumps any need based on satisfaction. The Liver King feels that the more you move your body the better off it will be whether or not there are other rewards associated with the activity.

Shield yourself from the modern dangers of Wi-Fi, fluoride, and seed oils. These “dangers” end up compounding with an additive effect to disrupt your hormone’s metabolism.

Relax, take off your shoes, and begin to pay attention to how you’re connected to the world around you. This routine can help maximize both the quality of your nocturnal rest and your resting heart rate.

Another inciter to the benefits of exposing oneself to cold localities is the idea of taking cold showers, diving into cold rivers or lakes, or even simply taking a chilly shower. Brian thus recommends that we use cold environments to maximize the enhancement of our blood circulation and understand our capability to withstand the pressure of danger and stress.

Midday sun provides plenty of vitamin D, which works with the rest of our fat-soluble vitamins A and K, found in liver and bone marrow.

Brian doesn’t think that we should challenge another man the next time we see him walking down the street, but he points out to us that we need to celebrate attaining goals and dreams and finally enjoy the healing effects of dopamine once we beat them.

Pertaining to function, and how our ancestors made it their goal to protect those around them by building shelter and searching for food, Brian now admits today they no longer have to be concerned that much about these things, but does state that we ought to put away the phones and just spend time with friends and family we’ve always needed each other.

What Is Liver King’s Diet?

The Liver King’s diet consists mostly of liver, which is why he has chosen it as his namesake. Liver King explains in the documentary that he consumes liver on a daily basis, as well as chicken hearts, turkey hearts, and bone marrow. On occasion, he also finds bull testicles very tasty, believing they are packed with nutrients.

How Did Liver King Make His Money?

What is Liver King’s Background?

Liver King is an entrepreneur and social media influencer. He started his business in 2012 as a seller of Ancestral Dietary supplements, which he developed and marketed. Liver King has since expanded his business to include many products, including clothing, home goods, and water filtration systems. Liver King also owns a Spanish revival-style mansion on a small lake, surrounded by sprawling houses. He lives a lavish lifestyle with little financial stress.

How Much Does the Liver King Weigh? 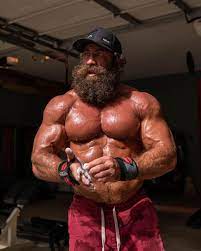 What is Liver King's net worth?

Liver King's net worth is approximately $1 million. Liver King's primary source of income is from his career as an entrepreneur and social media influencer. He earns the majority of his fortune from his Ancestral Dietary supplements brand, giving him an average salary of $250,000 approximately. He lives in an 8,300-square-foot Spanish revival-style mansion on a small lake, surrounded by sprawling houses.

What is the age of Liver King?

The Liver King's date of birth remains a mystery. However, according to a blog post published by BuzzFeed News in March 2022, he was 44 at the time of publishing.

What is the real name of Liver King?

Where can I find more information about Liver King?

What are ancestral liver supplements?

The liver is an organ that breaks down food and metabolizes drugs and alcohol in the body. The liver also produces bile, which helps to break down fats. Although the liver is a hardy organ, it can become overloaded and damaged by excessive alcohol consumption, drug use, or exposure to toxins. In order to protect the liver, many people take ancestral supplements. These supplements usually contain milk thistle, which is a plant that has been shown to help repair liver cells and promote detoxification. Other common ingredients in liver supplements include vitamins C and E, selenium, and zinc. By taking these supplements on a regular basis, you can help to keep your liver healthy and reduce your risk of liver disease.

Is it good to eat raw liver?

You can get a severe case of food poisoning brought on by the hepatitis E virus, salmonella, Campylobacter, or other bacteria from food poisoning if you consume raw swine flesh, liver, or other organs. Always cook organ meat before you eat it.

What is ancestral living?

Ancestral living is a lifestyle that is based on the traditional ways of living that were practiced by our ancestors. It includes eating a natural, organic diet, spending time outdoors, and connecting with community.

Where can I buy liver king supplements?

You can buy liver king supplements through either one of Brian Johnson's websites (AKA The Liver King) liverking.com or ancestralsupplements.com.

What are the health benefits of eating liver?