Posted by The Minister of Capitalism on Apr 18, 2022 in Options Trading

In this article, we get into some of the Chuck Hughes Optioneering reviews that I’ve found when investigating their system.

I went over their website, contacted their support team and read up on a few reviews that I managed to find online.

But if you want the quick version: I’d avoid them. They want $6000 up front to sign up, and it’s doubtful if the claims they make are legit. Besides, when it comes to a comparison of value for the money, a membership inside The Empirical Collective is a no-brainer. 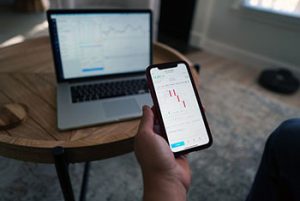 I started by contacting them through the support email listed on their website with a couple of basic questions.

I thought I’d start the conversation by asking them what kind of options they traded in their optioneering service.

Did they just buy simple calls and puts, or did they get into more complex options strategies?

Upon receiving a response, their support agent only wanted to answer my questions if I contacted them via phone.

I found this to be very strange, as I had some specific questions I wanted answered and I didn’t want to spend a lot of time tied up on the phone.

I persisted, asking if he could respond to my questions by email.

A while later, I received this response:

It’s much better if we speak directly, since Chuck has multiple programs at different price points.  However, the Weekly Options Alert service is currently available, after Chuck pays the $3000. USD enrollment fee for you, at an annual subscription cost of $6000. USD. The service includes puts and calls, market neutral trades, covered calls and ETFs. This includes all trades as well as back-up support, available by phone and email, 9 AM to 5 PM Pacific Time. With your subscription, you have access to Chuck’s proprietary website. Trades are sent to you by email. You simply follow the provided trade signals, using any online broker of your choice.  If you have questions about the trades, you have access to back-up technical support by phone and email.

Based on this response, it looks like this system involves trading a variety of different options beyond buying basic calls and puts.

And while this isn’t bad by itself, people wanting to follow these trades will have to have accounts that are approved & funded well enough to trade these options.

But at a yearly cost of $6,000 up front I can’t see how anyone would pay that kind of money – especially when their services don’t have much in the way of reviews.

For the record: I didn’t want to phone them because when I researched them online, I found that all of their “support” agents are actually trained salespeople in a call center.

So rather than answering questions, they try to hard sell you on their trading system as soon as you call them.

With that being the case, I decided the best course of action would be to email them.

Moving on, I decided to dig in a little more and research them online.

So I started with the claims they made on their website.

Hughes Optioneering trades weekly options, and claim to have a 94.1% trade win rate.

They say that their team has a combined investment expertise of more than 60 years.

Their website claims that Chuck Hughes himself began investing in options with a tiny $4,600 trading account, but within two years, he had gained more than $460,000 in profits.

According to them, the money he made just by trading options dwarfed his previous salary as a pilot.

They go on to say that even in the midst of all the global uncertainty, they have generated over $3.3 million in real gains over the last five years.

The average hold per trade is a whopping 67 days and the average annual return is over 370%.

They go on to say these figures came from 335 winning trades and 21 losers.

The Hughes OptioneeringTM Team claims these returns were made by trading weekly options.

These claims are incredible. And while they provide a list of returns by month on their website, as they use a variety of different option trade tactics, it’s hard to get an actual feel on the real world amount of money that is won or lost.

By this, I mean that – depending on the option trade tactic employed – you can have different amounts of money tied up in a trade.

And if the dollar amount per trade isn’t even (or close to) then the win/loss percentage isn’t necessarily representative of the actual percentage loss or gain.

And by using different option trade strategies, this becomes more of an issue.

In order to calculate this accurately, you’d have to use more of a weighted average based on the dollar amount invested per trade and then weight the win/loss percentage accordingly.

But I was curious if anyone had paid the money to join, so I kept looking and eventually came across this review…

Here’s one review I found while looking for more information on the Chuck Hughes Optioneering system:

Chuck Hughes and his fans claim that he’s a market expert or investing genius. But he’s ripped me off. Chuck claims to have discovered a secret recipe via experience and is willing to give everyone the secret through his training classes, which range in price from $6,000 to $15,000. But you have to pay up front.

A simple Google search of his name and fraud will teach you all you need to know – it’s all about high pressure sales tactics. All of the content on his YouTube videos is designed to encourage you to pay money for his online courses. Every huge promise is a ruse! I fell for those false promises and lost $7000 in the process of claiming to be a stock market expert. The main problem I have with this person is that he presents his track record as if he has never lost money before.

It makes it quite obvious that Chuck Hughes is a liar. He just sounds as if he has cracked the market and become a millionaire, and that there’s no possibility that he could ever fail.

But that’s now what I’ve seen from his online seminars, which aren’t even worth $70.

He even proclaims himself to be a global champion of trading!? I couldn’t find any proof…seems a little shady to me.

I attended his presentation in Washington, D.C. few years ago. There were probably 150 people in attendance, each paying $2,000.

I feel that he makes most of his money from these events and training rather than by actually trading options.

Overall, I feel that his claims are not quite true and I recommend avoiding him.

All things considered, I can’t recommend their service.

I feel that for the initial buy in of $6000 for one year, there should be a lot more proof that is readily available and shown on their website.

It feels like it’s more geared towards being a sales machine than an actual trading firm.

So what can you do if you want to avoid this scam and make money trading?

At this point, I feel it’s best that you either learn to trade on your own, or look into better alternative like The Empirical Collective.

After all, their win rate is great and they are a lot more clear about what they actually offer their members. (And their membership fee is a fraction of what chuck huges optioneering seems to offer.

When people searched for chuck hughes optioneering reviews they were also interested in the following topics as well:

We found this review when we looked for insight into tradewins com reviews:

I decided to enroll in the course. I found that the course’s details were greatly overstated.They aren’t even close to keeping even 10% of their promises. They claim that the advice they give is 100 percent guaranteed to provide excellent outcomes. Some worked, but most failed. Once I completed the course, I found out that the suggestions were all the same and that there was nothing new in the training.

To be fair, I did make a small profit once in a while. But there were a lot of times that I failed miserably. Each week, they also gave out 4 trade ideas. I’d say they were 50 percent successful. Occasionally, even less.

But after three months, they quit sending me the trade alerts.

I even called them to report the issue. And it took them more than 15 days to respond to my inquiry. I continued waiting for their phone calls and emails, but they kept making me wait.

I recognize that the market is never predictable. But I feel that they are very deceptive and I felt tricked when they stopped sending me the tips.

Trade like Chuck is a book written by Chuck Hughes where he supposedly explains how to make money trading.

Except even with a quick look at some of the reviews posted on goodreads, it seems that the book misses the mark.

One review claims that the examples in the book must be made up, as “No one could buy a protective put for far less than it is worth.”