Posted by The Minister of Capitalism on Feb 25, 2022 in News

Using their favorite price index (the core personal expenditures index) the FED compared today’s rising inflation to that of the early ’80’s, just before they increased interest rates and crashed the economy.

The Commerce Department said Friday that prices rose at their fastest rate in nearly 39 years, but that didn’t stop people from spending.

From a year ago, the core personal consumption expenditures price index, which is used by the Federal Reserve as its main measure of inflation, rose 5.2% from the same time last year. This was slightly more than the 5.1% Dow Jones forecast.

Inflation like this hasn’t been around since the early 80’s when Paul Volcker was at the helm of the Fed, when he spiked interest rates to curb runaway inflation.

Including food and energy prices, the headline PCE rose 6.1%, the fastest rate since February 1982. This is the biggest rise on record since then.

But this was mostly in line with where people thought it would be.

The same report showed that consumer spending grew faster than expected, rising 2.1% on the month instead of the expected 1.6%. The increase in spending reversed a 0.8% drop in December.

This all happened even though personal income was flat for the month, which was better than the expected 0.3% drop.

In the middle of all this, a child tax credit expired and a big change to Social Security checks took their toll on after-tax income, which fell 0.5%.

But there is some good news: Orders for durable goods rose 1.6 percent in January, far more than the expected 0.8 percent rise in sales.

For the markets, inflation has been very important because prices have been rising at the fastest rate since the 1970s and early 1980s.

Of course the worry is that the FED will jack interest rates like Volcker did back in the day, which caused the economy to tank and fall into a recession.

In this case, policymakers have also said that rate hikes are coming, but they want to do it slowly. Most central bankers say they expect to start raising interest rates in March, and the markets expect these rate hikes to happen at least six times this year.

“Overall, the real economy appears to be in better shape than we thought,” wrote Paul Ashworth, the chief U.S. economist at Capital Economics. He then added that the Ukraine conflict, would make a 50-basis-point rate hike less likely.

A report on Friday showed that energy prices rose 1.1% in January, and food prices rose 0.9%. Services prices rose 0.4 percent, but the rate of inflation cooled off a bit.

A lot of money has been coming in, which has kept the demand for goods up.

The number of new orders rose 0.7% without transportation. It was up 1.6 percent.

Time will tell, but for now inflation continues to rise as the FED waits on increasing interest rates.

Seems like they’re caught between a rock and hard place, as they kick their rhetoric machine into overdrive in an attempt to let the narrative direct the markets.

But what choices do they really have?

Increase interest rates too quickly and you’re likely to tank the economy, sinking both the housing market and the stock market in the process.

On the other hand if they sit on their hands and hope it all magically goes away, inflation will keep pushing prices higher.

Which may kill the economy in the end, via some kind of death by a thousand cuts slow burn. 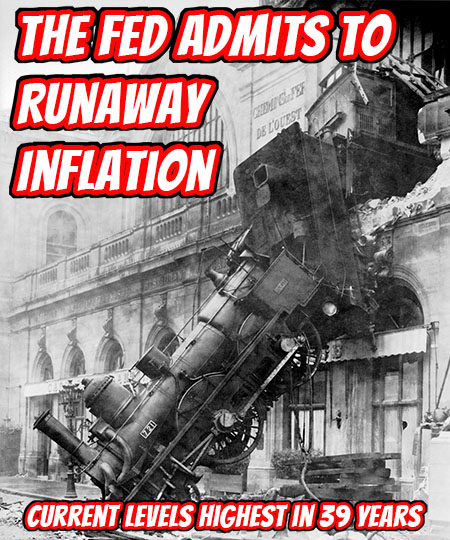