The SEC puts the screws to institutional traders looking to short stocks, in a surprising move that could bring more market clarity.

The complaint from many people (like Elon Musk) is that some hedge funds manipulate stock prices by taking a short position in a company, and then leaking negative news designed to force the stock price to its knees as the hedgies unload their position.

Musk (and many others) claim that certain hedge funds do this over and over, like a thief returning to an unsecured ATM.

So the Securities and Exchange Commission announced on Friday that it is proposing a new rule and adjustments to current laws that would require short sellers to disclose their bets more often.

The proposed modifications, according to Wall Street’s top regulator, would force institutional investors to gather and disclose certain short sale data to the SEC every month. For each asset, the commission would then make aggregate data regarding big short holdings, including daily short selling activity, publicly available.

As you may well know, short selling is when a trader borrows shares of a company’s stock and then sells them on the market to bet against it. In principle, the trader will eventually acquire those shares at a reduced price and return them to the brokerage or asset management, cashing on the difference between what they sold the stock at and where it dropped to.

In a news statement, SEC Chairman Gary Gensler stated, “I am delighted to endorse this proposal because, if implemented, it will increase transparency of an important sector of our markets that would benefit from greater visibility and regulation.”

The proposed amendments to Regulation SHO, a set of SEC restrictions on short selling, would protect managers’ identities and individual short holdings.

The new regulation, according to Gensler, will apply to institutional managers who have a short position of at least $10 million, or the equivalent of 2.5 percent or more of the total shares outstanding.

“It’s important for the public and the Commission to have a better understanding of this critical market, particularly during times of stress or volatility,” he said. “The proposed regulation would assist the Commission in dealing with future market occurrences by finding a compromise between the requirement for openness and the price discovery process.”

Basically they’re trying to make it more difficult for large institutions to manipulate the price of a stock by going short by adding more regulations, so they can’t keep using pump & dump tactics that so many in the penny stock market use.

The new restrictions are the SEC’s latest move to beef up its monitoring of the practice, which has been accused by legislators in recent years for producing huge and hazardous price fluctuations on Wall Street. Individual investors gathered together on social media in early 2021 to boost equities like GameStop, which had attracted a lot of short interest.

Late last year, the Stocks and Exchange Commission proposed a regulation requiring brokerages and asset managers that lend securities to short sellers to submit data on each loan to an oversight body such as the Financial Industry Regulatory Authority within 15 minutes of making the loan.

In light of its most recent rule modification suggestions, the SEC has decided to extend the public comment period on that rule. 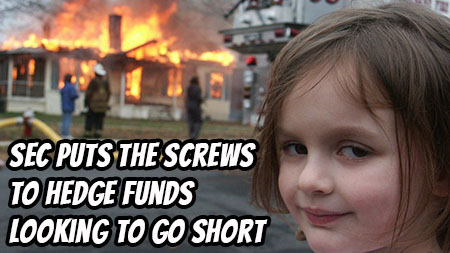